I wrote this short story with my nearly-7 year old after we saw a jacket hanging abandoned on a fence.  It reminded me of the work on the importance of vulnerability by Brene Brown and within U.Lab.

The boy was late for school.

His bag had broken and he lost his homework, his snack for break and…

“OH NO! MY PROTECTIVE ARMOUR HAS GONE!”

His armour stops him from getting hurt.

Like when someone throw 26 boxes in under 2 seconds at him.

Or if they shout mean things at you.  The words just bounce off.

But then the boy remembered.

Sometimes a mean word can slip under the cloak and pull your pants up!

And the boy might donk someone first because his armour protects him.

He might say a mean word and a friend does something mean back.

Then he does something MORE mean and it goes on and on.  Until a grown up steps in. 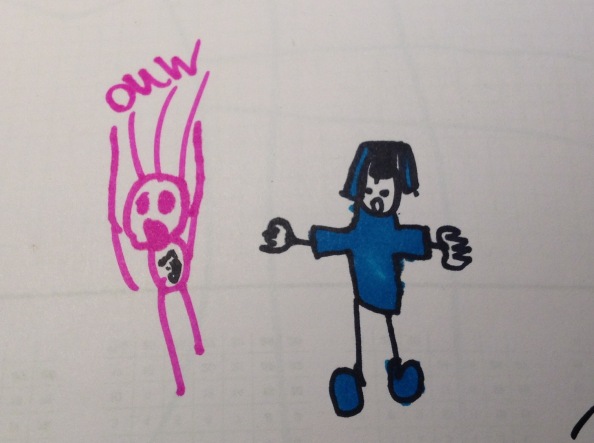 The boy sits on the bench and sighs.

He sees the Big Boy picking on another boy.

If he had his armour on, he would feel brave and go help.

He loves his armour, even if it gets him in trouble sometimes.

It’s blue and shiny and hard and makes him look cool.

The Big Boy spots him and starts to laugh and point.

Lots of kids crowd round and start to laugh and point.

But a few sit next to him and one girl holds his hand.

Another boy says, “One time at school, my trousers fell down!”

And the other kids tell their stories.  The boy feels much better for sharing something he would normally keep hidden.

“Who wants to play Tig?!” the girl shouts.

“Me!” the boy says and he runs like the wind.

No one can catch him.  He doesn’t have his clunky, heavy armour on to slow him down.

All the way home, the boy is smiling.

He finds his protective armour hanging on a fence.

The boy gives it a fond pat and leaves it right there.